php is a serverside scripting language , that executes on server. php is a most useful language for developing dynamic website it is able to connect with several databases.

php7 is a latest version of php , it includes more security, exception handling and so many new things. 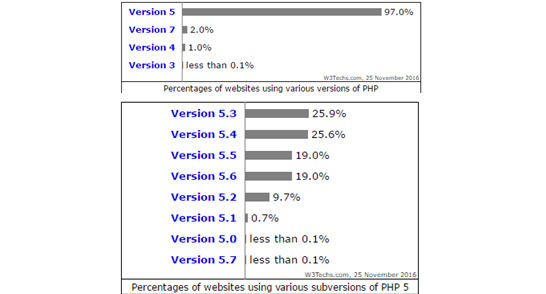 PHP is the backend to countless websites and is one of the most common languages in use across the web.  As a server-side scripting language, it’s function is to interpret website code, perform a function and then return the results to a site visitor’s browser.  In fact, you are seeing it in action right now, as this page is rendered dynamically using content stored in a database.  Created by Rasmus Ledorf in 1995, originally to power homepages, PHP has been actively developed since and the latest version, PHP7, was released at the end of 2015.

PHP is widely used for custom software development. Usage statistics indicate that PHP accounts for over 80 percent of all websites, topping 240 million sites according to the Netcraft web server survey (2013), here is another survey with the same results. PHP 7 (2015) is the most important revolution for PHP since the release of PHP 5 in 2004. The speed of PHP 7 and security improvements alone make upgrading to PHP 7 worthwhile. In this post, we will discuss these improvements in more details.